Have you ever seen someone with a sleepy-eye appearance?

Did you know there is a medical term for it?
Yeap, Ptosis with a silent P it is. Ptosis is strictly a condition/symptom and NOT a disease marked by a drooping upper eyelid that at times can be severe enough to cover the pupil and affect vision. Ptosis is mostly a result of weak eyelid muscles or separation from the muscle tendon. Ptosis can be
·         Congenital (Muscular dystrophies)
·         Due to;
–          Neurological disease (Diabetic neuropathy)
–          Muscular disease
–          Neuromuscular disease (Myasthenia gravis)
–          Stroke
–          Injury
–          Growths (Brain tumor, pituitary cancer)
While ptosis can be improved a bit with exercises, it can only be fixed for good with a ptosis correction surgery. Speaking of which, ‘ptosis correction’ double eyelid surgery is one of the most commonly practiced surgeries in Korea.
Do I Need Ptosis Correction Surgery?
Do your eyes need this surgery? Well, read on to learn whether you’re an ideal candidate for the surgery or not. While a sagging eyelid that affects the vision is clearly a major symptom, there are other hints as well. These include;
·         Extremely dry or watery eyes
·         Weary or tired looking face
·         Saggy skin around eyelids
·         Appearance of wrinkles (forehead), since forehead muscles are now used more in an attempt to keep eyes open.
·         Frequent headaches or migraines since drooping of eyelids.
What is Ptosis Correction & How is It carried out? 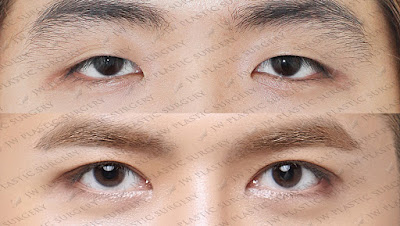 Correction of ptosis with a surgery aims at pulling eyelid muscles upwards assuaging saggy or drooping eyelid and giving eye a vivid shape. When managing ptosis, there are two approaches, surgical and non-surgical ptosis correction. The 1-2 hour surgery carried under local anesthesia or anesthesia with sedation is a minor procedure that doesn’t require hospitalization.
There are various ways to go about the surgical management guided by the condition of your eyes;
·         Incision ptosis correction
·         Partial incision method
·         Non-incisional ptosis correction

Incisional Ptosis Correction
Incisional Ptosis correction may involve several techniques depending on the type of ptosis. These techniques are aponeurosis advancement, plication or resection of Levator or Muller’s Muscle. Let us briefly discuss the various operations.
Incisional ptosis correction itself involves reduction, strengthening and reattachment of levator muscle. The extent of reduction depends on the severity of ptosis.
Levator muscle enhancement is mostly carried along with a double eyelid surgery; however the surgical field is relatively deeper here. Once a customized ideal eye shape has been designed the following steps are taken;
·         Incision is made and distal fascia of the lax muscle dissected
·         Once the muscle is partially detached from the tarsal plate, aponeurotic tissue is resected, shortened and then stitched to an appropriate position of the tarsal plate. The position and height are guided by the severity of ptosis here
·         Once the muscle is fixed, superficial eyelid skin is stitched and fixated to create double folds.
Levator Resection is a technique used when levator function is not normal, for example in congenital ptosis. This involves muscle tightening in a manner similar to aponeurosis tightening.
Muller Muscle Resection is another technique that involves giving an incision on the inside of eyelid followed by shortening, tightening of the Muller’s muscle with the help of stitches. Stitches are removed 3 weeks after the surgery.
You are an ideal incisional ptosis surgery candidate if;
Removal of stitches is mostly done on the 7th day of operation
Partial Incision method 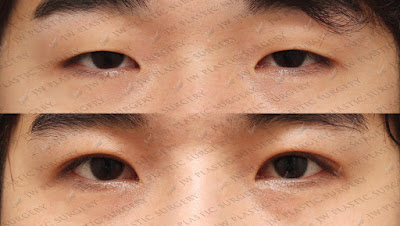 Yet another way of achieving of a natural and permanent double eyelid that best works for people who have had a failed non-incisional experience or if the individual has an eyelid with thick fat tissue that is not suitable for the non-incision method.

The procedure involves making a partial incision of 2-3mm for removal of fat tissue on the eyelid. It is a combination of both the buried suture method and the surgery. The main goal of the method is to release fat completely (surrounded by the orbital septum) and tuck Muller muscle towards conjunctiva, so that ptosis and sunken eyes are corrected.
Non-incisional Ptosis Correction


Non-incisional ptosis correction on the other hand involves muscle readjustment through conjunctiva by flipping the eyelid. It involves making a hole on the double eyelid line and pulling the muscle and tarsal plate. You are certainly an ideal candidate for this type if;
Ptosis Correction- The Plus Points
Surgical ptosis correction is a magic bullet that offers promising results. Here are a few plus points of the procedure that might help you in making your final decision;
According to a study ptosis correction resulted in an improved social interaction with 60% having an improved self-confidence and 80% having a reduction in anxiety.[M2]
Needless to mention the skill and expertise of your surgeon is the single most important factor that determines the success and outcome of the procedure. Professionals at JW Eye Surgery Center make sure that with their 17 years of experience and provision of medical quality services, patients leave satisfied, content and most importantly with a boosted confidence. 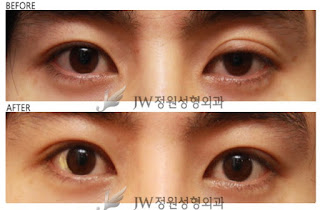 
While undoubtedly surgery is the only way of fixing ptosis for good, there are certain exercises you can do to improve your condition. According to the National Stroke Association eye exercises that encourage the use of affected eye and eyelid muscles are recommended in order to increase the muscle tolerance. Exercises that should be performed on an hourly basis include;