On the Afternoon and Evening of Surgery
by JW Plastic Surgery Korea
• After Eyelid Surgery from JW Plastic Surgery Korea You should rest as much as possible, preferably in bed on two pillows or in a recliner.  A bandage over the eyes is not needed.  In the evening, you may take a bath if someone is there to help you.  Avoid straining or bending over.  Watching television is acceptable.
•  To prevent swelling after Eyelid surgery, apply clean (not sterile) cold compresses to the eyelids as much as possible until you go to sleep.  Gauze pads or a clean towel may be soaked in a basin of ice cubes and applied directly.  Alternatively, a large Ziploc bag may be partially filled with ice cubes or frozen baby peas and placed over a moist gauze or towel. 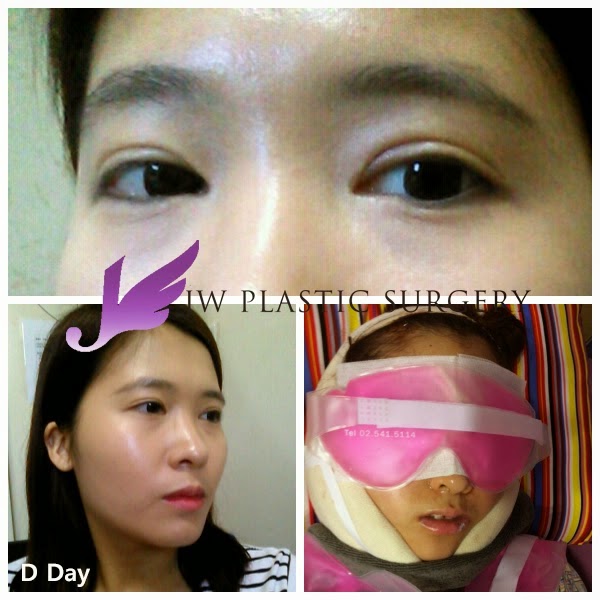 •  Pain after Eyelid surgery is usually mild.  Use pain medicine you were given from JW Plastic Surgery Korea. Avoid using aspirin or ibuprofen for two days.  Severe pain should be reported.
•  It is normal for the eyelids to become red, swollen, and bruised after the Eyelid Surgery.  A small amount of bloody fluid draining from the wound is normal for a few days.  Occasionally, the eye itself may turn red and swell.  Brisk bleeding not responsive to pressure should be reported.
•  The eyelid creases will always look too high, too deep, overly rounded, and asymmetrical until swelling resolves and the deep tissues have a chance to soften. The eyelashes may appear to be pointed unnaturally upward.
•  If you were given an antibiotic drop or ointment from JW Plastic Surgery Korea, gently apply a small amount to any stitches before going to bed, and then twice a day thereafter.  If your eyes feel irritated, the antibiotic may be applied directly to the eye surface. Avoid the use of dry Q-tips on any stitches.
Beginning the Next Morning
•  Swelling is usually at its maximum on the morning after surgery; bruising may increase slightly for several more days. Until stitches are removed, do not expect to see any changes in the crease.
•  Discontinue the cold and begin warm compresses (gauze or a clean washcloth) for several minutes 3-4 times a day.  A microwave may be used to heat a moistened washcloth (be careful not to overheat) that we gave eyepatch from JW Plastic Surgery Korea after the Eyelid Surgery
•  Moderate activity may be resumed, although much bending and straining should be avoided for three days.  Moderate exercise (brisk walking) may be resumed in three days.  Avoid vigorous exercise (jogging) for ten days and swimming for at least two weeks. Sun exposure will not harm the surgery.
•  Reading or computer work may be difficult due to swelling and some slight blurring of your vision, but such activities are not harmful to your surgery.
•  Keep the incisions clean by gently cleansing with a clean washcloth or gauze.  If water alone is not sufficient, a solution of 3% hydrogen peroxide diluted half and half with water may be used.  If bleeding is activated, apply pressure.
•  You may shower and wash your hair, but try to avoid getting soap in the incision.
Later Instructions and Information
•  It is not unusual for a few of the sutures to untie or break after several days.  As long as the incision remains closed, this is no cause for alarm.
• Try to limit your salt intake as this may increase swelling.
•  Stitches are removed 7 to 9 days after surgery.
•  After the sutures are removed, use the antibiotic that evening at bedtime and then discontinue.  Warm compresses should be used at least once a day (and more if you wish) for three or four more days. Because the incision is fragile, be careful not to clean or pull on the wound for several days after the stitches have been removed.
•  It is not unusual for the eyelids not to close fully during the first three weeks after surgery.  During the day, the use of any over-the-counter artificial tear preparation may feel soothing.
•  After five days, the light application of a concealer make-up to the upper cheek area may help to camouflage any bruising.  Do not apply directly to the upper eyelids.  Regular eyelid cosmetics may be resumed after 10 days. Use of an eyelid moisturizing cream may feel soothing. Do not apply Vitamin E oil. Special scar-reducing preparations (gels, strips) are of no value in double eyelid surgery.
•  Most people look the worst on the third day, after which improvement begins slowly.  Most bruising and swelling are gone by two to three weeks, although a small amount of swelling (20%) will remain behind for a much longer period. The crease will vary day to day and only gradually assume its approximate final position over four months or more, so try to be patient. Final healing (the last 5-10%) is a much longer process and may take several years.
•  Contact lens wear may be resumed in 2 Weeks.
•  The incision will turn red, slightly elevated, or bumpy in the weeks following surgery.  The scar will then continue to fade and soften for a very long time.
•  The incision may feel slightly tender for a few months. Itching is common.  Any tight feeling or eyelash numbness will disappear over several months.
•  Do not try to evaluate the success of your surgery during your early recovery
JW Plastic Surgery Korea
JW Plastic Surgery Korea
598-6 Shinsa, Gangnam, Seoul, South Korea
English Hotline : +82-10 5768 5114/ 10 7195 5114
Kakao Talk ID : jwps / jwbeautykr
E-mail : [email protected]
Homepage : www.jwbeauty.net
Blog:jwbeautykorea.blogspot.com
0Shares
Previous PostPlastic Surgeons Training Program at JW Plastic Surgery KoreaNext Post[Dr.Suh got invited to Lectured at Seoul Rhinoplasty Forum]